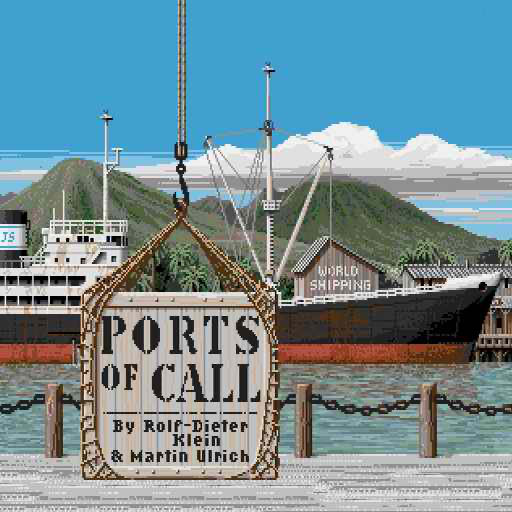 new: real map used (internet required for this function) - see your ships on a worldwide map -- and look at the game harbors in reality.

Ports of Call has a long tradition
the first version was released
on the Amiga 1986 with other versions
following.
Now the classic game is getting mobil. It features the classic design.

A Background on Tramp Shipping:

The traffic of goods by sea is organized in accordance with international agreements and contracts between individual countries.
About 80% of the goods (called "cargo volume") transported between two countries is handled by ships registered under the flags of the countries concerned. The remaining 20% are
open to the free competition of ships under other flags. These ships, called "tramp" ships, are usually prepared to transport all kinds of goods. This aspect of the shipping business is the focus of Ports of Call.

The Object of the Game

Each player founds his own shipping company, with a starting capital of $4.6 million to buy ships. Freight and ports of call can be chosen continuously from offers on the market.
Then the captain chooses an economic travelling speed and casts off to encounter many adventures on the high seas.

After unloading his cargo, the captain is credited with the agreed payment. Then he may refuel, make necessary repairs,
and so on. The next job is to find a new, lucrative cargo, buy further ships, and/or repay his mortgages; in other words,
he must have a more productive company than his competitors.

A player's chances of success improve the more he knows about international shipping. All data for the game originated
from actual developments in the maritime world: the fluctuation of freight rates, refueling costs, port charges, and ship operating costs.

But the game is not a pure economic game, also a ship simulator is integrated, and the captain can steer his ship manually, either if necessary, or to save money and
get a good status.

In summary, Ports of Call has been developed with this motto in mind: "Software with Hard Facts."

latest hints: start using preowned ships, and keep them in good condition to avoid disasters (like rats for example).
To avoid the burglar, visit your office in a regular interval.

Now toggle for fullscreen !
Integrated Gamepad control for sim2d.
Look on our forum for first help and tutorial on youtube.