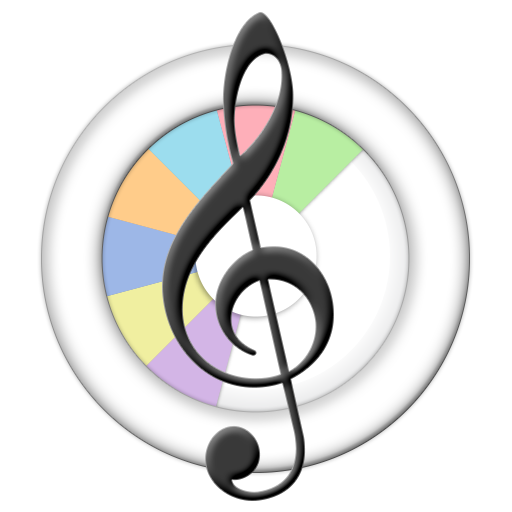 Chord Wheel helps you to understand how music works. Also, it helps you to get some musical ideas for your own songs.

The Interactive Chord Wheel is an implementation of one of the most basic and significant music theory, 'Circle of fifths' on Android. This app is uniquely designed to represent the relationship between a scale and a chord.
In the screen of this app, the Circle is made up of several concentric rings, which provides various information. By rotating the 2 rings, inner and outer, the needed information can be got easily.
The outer most ring shows information on the scale such as a tonic, a dominant, a sub-dominant, a relative minor, a relative major, and a progression of the degree. The next outer ring shows a series of note's name ordered by the progression of 5th, and the root note of a scale can be set by rotationg this ring. When rotating the outer ring, the inner ring rotates also. The next ring shows a degree of a note and a diatonic chord in that scale. By rotaing the next ring, a chord can be set. If a note name of the outer ring is touched, then a diatonic chord, of which the root note is the note, is set. Instead of the inner chord ring, a key progression ring can be displayed which is very useful when transposing a song to another key. At the center of the concentric rings, a signiture of the scale is displayed.

Switchable Inner Wheel
The inner wheel can be switched when it is needed. A chord wheel, a transpose wheel, and a interval wheel are avalable.

Scale
A major scale and 3 minor scale and church modes are available. The scale tones can be distinguished by its background color. A diatonic chord of the scale can be set by touching one of its scale tones.

Diatonic Scale Chord
Both triads and 7th chords are supported for each scale.

Chord Wheel
Chord wheel is uniquely designed to represent the relationship between a scale and a chord. Most diatonic chords are available. The chord tones can be distinguished by its background color or its mark.

Transpose Wheel
For transposing, a ring of key progression can be displayed instead of a chord ring.

Interval Wheel
Intervals of notes can be found out easily and quickly. Just switch the inner wheel to an interval wheel.

Inversion of a Chord
The inversion of a chord can be played by clicking a button, and also can be seen through the piano view.

Notation System
There are various ways of naming note names. In this app, CDEFGAB, CDEFGAH, and Fixed-Do systems are supported. Also, you can set a prefered accidental, a sharp(＃) or a flat(♭).

Piano
Information about a scale or a chord is shown on a 2-octave sized mini piano. It can be played by touching the keys.

Guitar
Information about a scale or a chord also can be shown on a guitar fretboard. It's tunable.

Clef / Signature
A signature of the scale is showed at the center of rings. A clef can be set to a treble of a bass.
When the center is touched, user-defined action is performed.

Sounds
The sound of a scale and a chord can be played. A chord sound can be played arpeggio pattern or not.
Piano, E.Piano, and Guitar sounds are included. The bundled sounds are recorded in high quality. 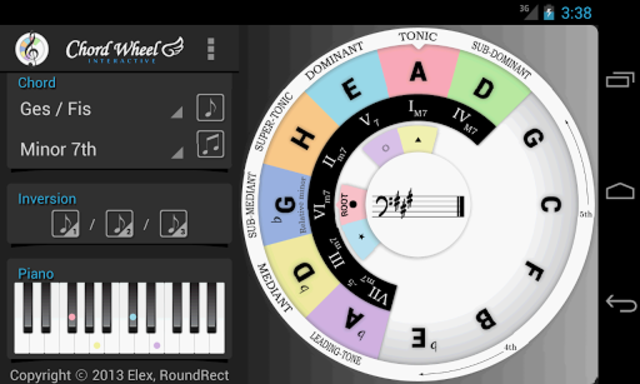 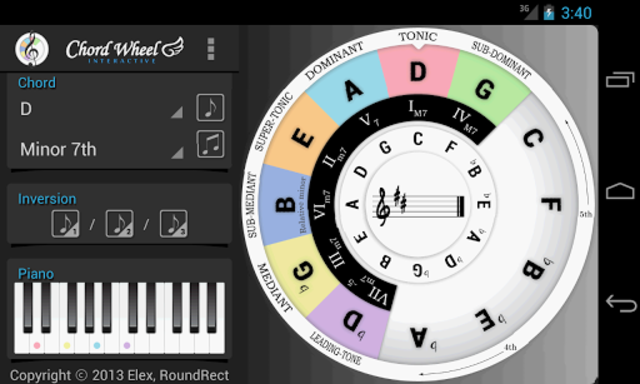 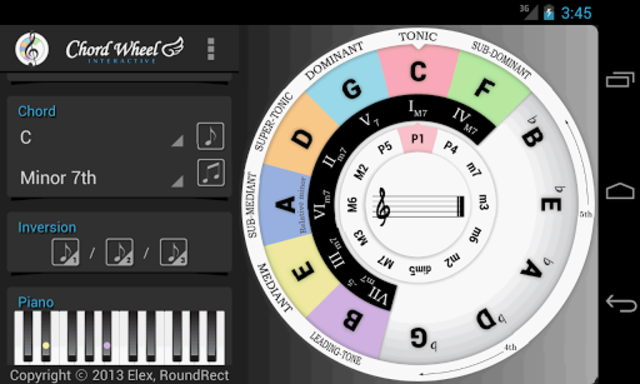 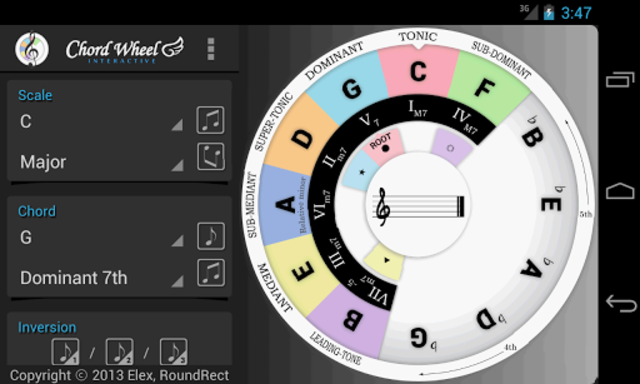 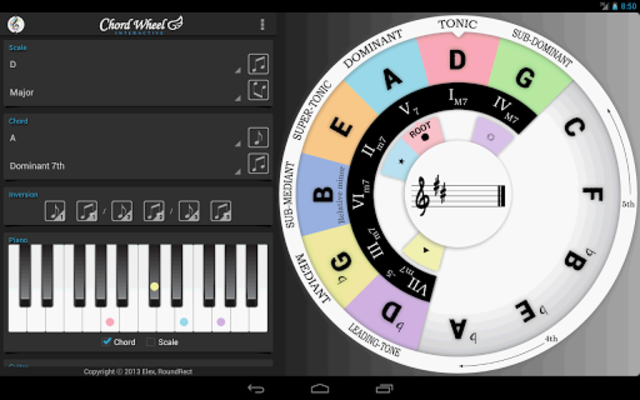 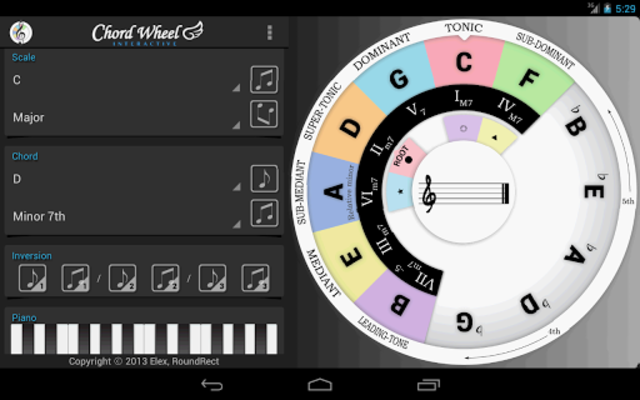 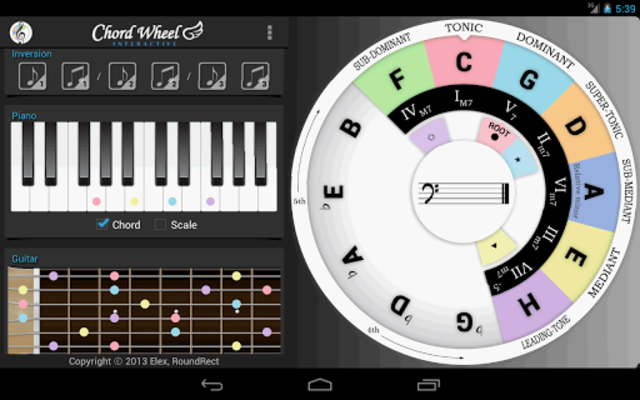 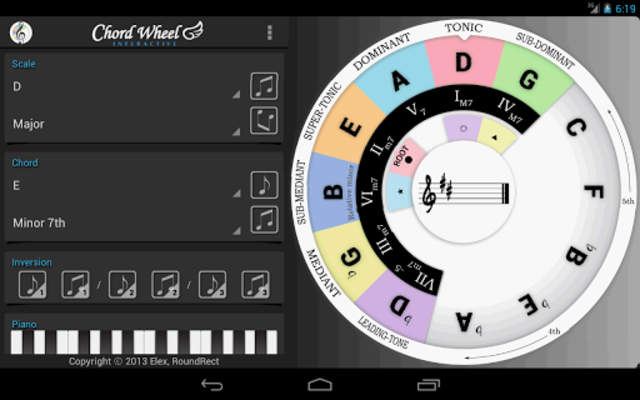 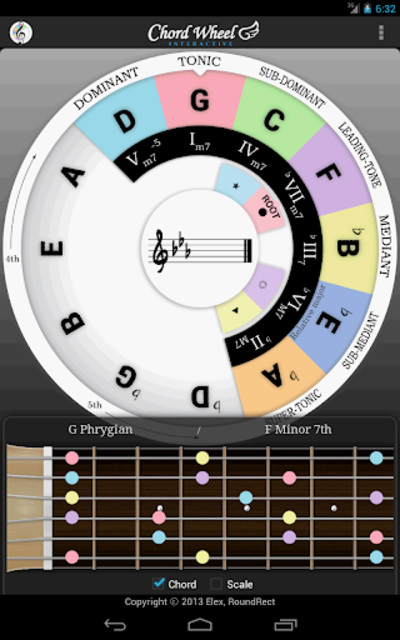