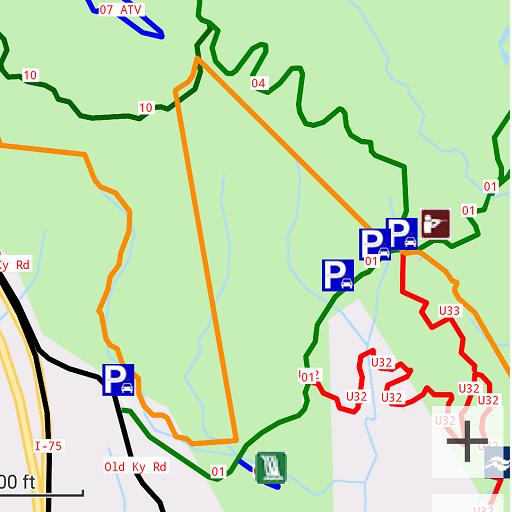 Lifetime maps, no in-app purchases, no annual fee, and free updates. Over 15 miles of Trails and 69 Points of Interest. Local Company. See the trails in the Sundquist Wildlife Management Area (WMA) located near Exit 141 on Interstate I-75 in Tennessee, which is located between Lafollette, TN and North up in the direction of Jellico on the East side of I-75. There are over 100 miles of maintained trails in this system. Included are Points of Interest (POIs) such as Waterfalls, Views, Cascades, and other interesting places in this Trail System. The App shows you Parking areas where you can leave your truck or trailer. This area used to be Called Royal Blue in the past. Now, the trails East of Interstate 75 are in the Sundquist WMA, and Royal Blue is one of the 2 other WMAs West of the interstate, the other two being Royal Blue and New River. There are two Private Trail Systems on the West side as well, called Brimstone, and Windrock (also known as Coal Creek). An app for these will be released soon as well.

You will be able to see which trail you are on, and, at intersections, which trails are ahead, so you can make decisions as to which way you want to go. Most trails in this this Trail System have numbers, which are displayed on the map. If you touch one of these Trail Numbers, it will display the Trail Name. Where the trail has no number, the Trail Name was used as a Trail Number as well. If you touch a POI Symbol, you will see the name of the POI.

You cannot say I am here, and I want to go there. It will not do true navigation. But you can use it to plan which trails you want to ride, and see where you are on each trail. It relies on the phone’s GPS, not just the internet or cell towers, to determine your location. Also, the Trails are in various colors. Generally, if the trail is Green, it is Easy, if it is Blue, it is generally Moderate, and if it is Red, it is Difficult. Any trail can be different from its color as to difficulty due to weather or wind and the colors are just meant to be a guide. You are responsible if you ride on a trail your vehicle is not capable of, or one that is beyond your capability. The app is just meant to help you find your way around.

There are three Permissions needed - Camera, Location and Storage. Camera permission is needed to allow you to take pictures from within the App, Location is needed to show you where you are on the trails, and Storage is needed to store your photos that you take.
Other apps we have on the store or are preparing to put on the store are Royal Blue ATV Trails, New River ATV Trails, Black Mountain ATV Trails (TN), Black House Mountain ATV Trails (TN), and other Trail Systems out West like Taylor Lake ATV Trails, Moab ATV Trails and Panguitch ATV Trails. If you have GPX files for a Trail System or want to capture Trails, get in touch. I have an App in the Store to gather Trails and Points of interest that is free. The App is ATV Trail Creator in the Android Play Store.
Don't have an Android? You can pick up a new one at Walmart or a used one. Just go to Settings and Location and look for the work GPS. If it has a GPS in the phone or Tablet (some tablets have a GPS), the app should work.